Within the Australian State of Victoria, government agencies like many other organisations worldwide face a significant challenge of preserving permanent electronic records produced in the regular course of business. Not all these electronic documents are active and are at a point in their disposition cycle where they are not required for day-to-day business however must be preserved for various regulatory reasons.  In preserving them, challenges such as program obsolescence, loss of record context, authenticity and integrity, media failure, reliability, loss of recordkeeping system have to be overcome.

To solve the above challenges, the Public Records Office of Victoria (PROV) devised a strategy for preserving long term electronic records known as - Victorian Electronic Records Strategy (VERS). The VERS standard specifies a metadata scheme which retains the basic information for an electronic record to aid in preserving its context even after significant periods of time.

VERS specifies a system-independent approach which relies on XML rather than specific application formats (like Office, PDF) to export the record and its metadata.

For a recordkeeping system to be VERS compliant, it must satisfy five defined specifications

Specification 1: System Requirements for Preserving Electronic Records - the overall functions that a recordkeeping system must perform to preserve electronic records for a substantial period

Specification 2: VERS Metadata Scheme - the metadata that a recordkeeping system must hold to conform to VERS

Specification 5: Export of Electronic Records to PROV – defines details of the approved media and mechanisms by which PROV will accept an export of electronic records

To meet specifications 3, 4 and 5 – Oracle WebCenter Content – Records will have to be able to

TEAM’s VERSExporter as an extension to WebCenter Content – Records satisfies all the requirements of generating the VEOs and storing them within a file system. The solution will create an XML representation of the latest version of the electronic record including its metadata (e.g. the context and history). The electronic document needs to be available in one of the formats – Text, PDF-A, PDF, TIFF, JPEG, JPEG-2000, MPEG-4. For electronic contents which are in other formats, the web version as a PDF is used; this is because PDF preserves a key characteristic of a record – which is to preserve the appearance of the record as the original creator saw it.  This document is converted into base64 data and embedded as part of the XML object. This XML object representation of the electronic record is then digitally signed to protect the authenticity of the contents. The XML rendition of a record is created when the content is registered into the system.

Storing within the file system, independent of the records management system, ensures that the contents are preserved even when the recordkeeping system has ceased to operate or is superseded by newer technologies and/or formats . 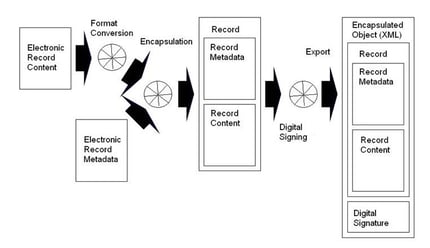 These Stories on oracle webcenter